FacebookEmailInstagramYouTube
Previous Next
The Labors of Hercules statues

The Labors of Hercules statues

In Greek mythology, the goddess Hera, determined to make trouble for Hercules, made him lose his mind. In a confused and angry state, he killed his own wife and children.
When he awakened from his “temporary insanity,” Hercules was shocked and upset by what he’d done. He prayed to the god Apollo for guidance, and the god’s oracle told him he would have to serve Eurystheus, the king of Tiryns and Mycenae, for twelve years, in punishment for the murders.
As part of his sentence, Hercules had to perform twelve Labors. Even though these tasks are very difficult, but in his hard struggle, finally completed, so Hercules become Greece’s greatest hero. Many statues have been made to commemorate his bravery and to inspire the people.

1. The Nemean Lion statues
In the bronze sculpture, the lion’s fierce open mouth is so real that even the roof of his mouth is carved. Hercules holds the lion tightly, and his muscular back gives you a sense of the fierce fighting atmosphere.
With the mottled texture of copper sculpture is different, marble sculpture surface is smooth, what place shows a more downy,he Nemean Lion. 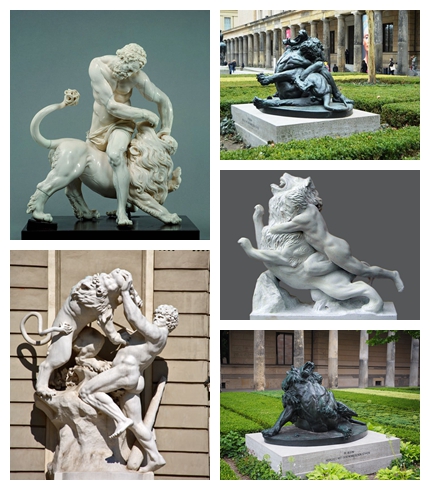 2. Large Sculpture Of The Lernaean Hydra
All nine of the hydra’s heads were spitting hyacinths at Hercules, and hercules held them under him and raised his club and fought with all his might.
The vividness of the designs is not only the balance of the sculptures, but even the fact that every scale of hydra is clearly visible.

Hercules held the boar by the ears with one hand and by the tail with the other, and made him unable to move.
Although the features of this sculpture are not so clear, the blurring feeling combined with its coppery green color is a unique beauty, just like abstraction itself is a kind of art.

4. The Stag of Artemis In Bronze

Hercules spent many days and nights chasing and capturing Artemis ‘s stag, This sculpture of a stag hunter is different from the previous ferocious animals. Hercules did not want to annoy her, so much so that he only gently grasped the antlers of the stag. 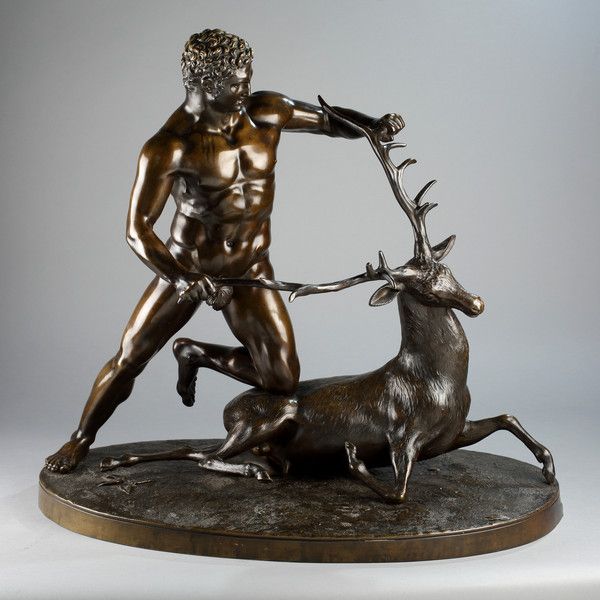 5. Hot Sale Bronze Sculpture Of The Stymphalian Birds
Hercules shot at the birds with his bow, which was stretched to its full height, one on his knees, the other on the stone in front of him.
Whether it is gold surface effect or patina greenish effect, this material adds power to the sculpture and makes the archery picture more tensive.

6. The Augean Stables Relief Statue
Hercules to clean up King Augeas’ stables. The stone relief on the wall, though incomplete, showed the story in an abstract way. Hercules used his mighty strength to push the riverbeds of a couple of nearby rivers and change their course. When he rested, the goddess Athena poured him a glass of wine. 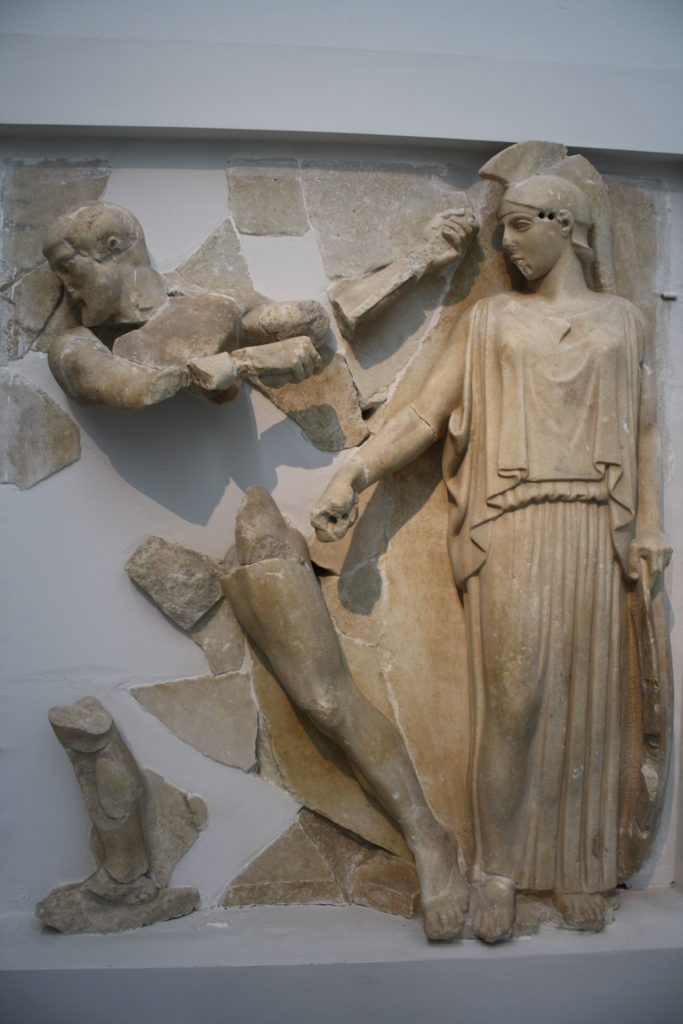 7. Bronze Sculpture Of The Cretan Bull
He found the bull drinking from a water spring, and snuck up behind the bull. Grabbing the bull by the horns, Hercules wrestled the bull to the ground and tied the bull up so it could not escape. The bronzed sculpture is a perfect illustration of the power, the size of the bull, and Hercules ‘ determined eyes as he grasps its horns. 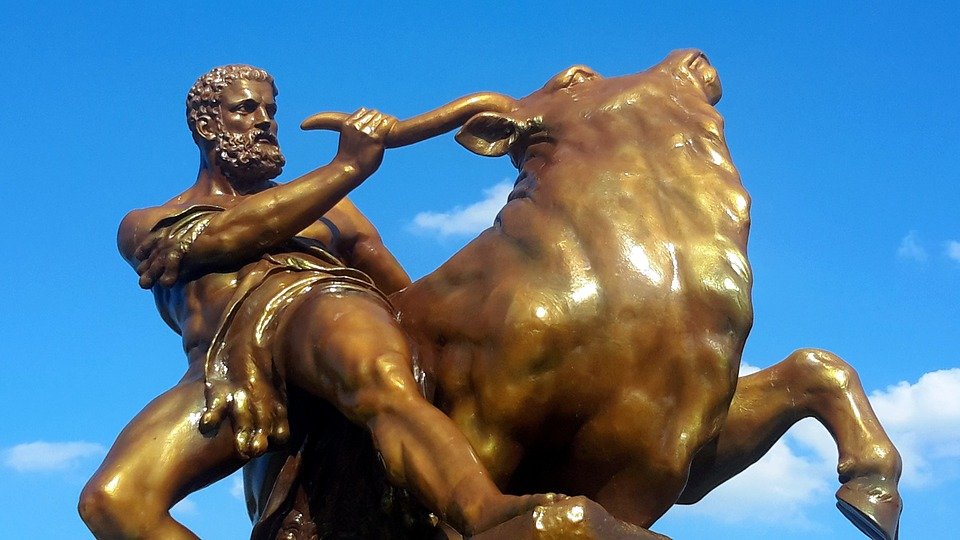 8. Life Size Marbel Statue Of The Girdle of Hippolyta
When Hercules realized he was under attack, he drew his weapons and killed Hippolyte. Then he undid her belt and took it away from her. In the marble sculpture, Hercules pins her waist with his legs, and Hippolyte ‘s horrified expression is vividly depicted. The fish serves as a base for the marble sculpture, which also adds to the story 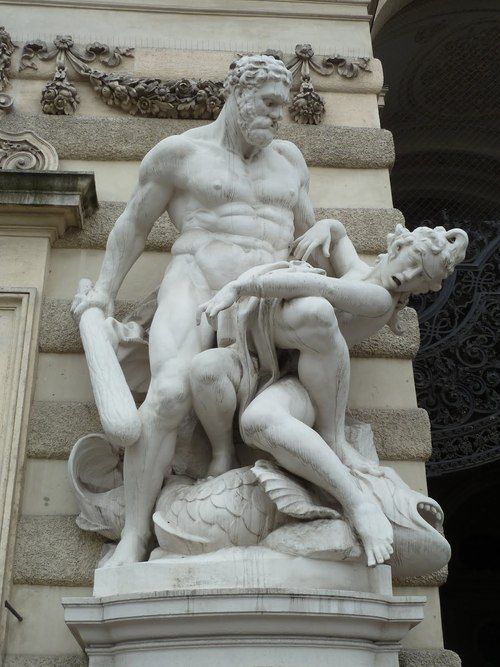 9. Relief Of The Cattle of Geryon
The Geryon was part man and part monster. He had two legs, the size of tree trunks. Three bodies grew from his waist, each with its own head and arms. Hercules seized it and shook his fist, and Geryon fell to his knees. The marble carving of Hercules’ muscular lines is very strong, and the Geryon ‘s dress, the curls on his head, the details on his skirt are all perfect, as if telling a story 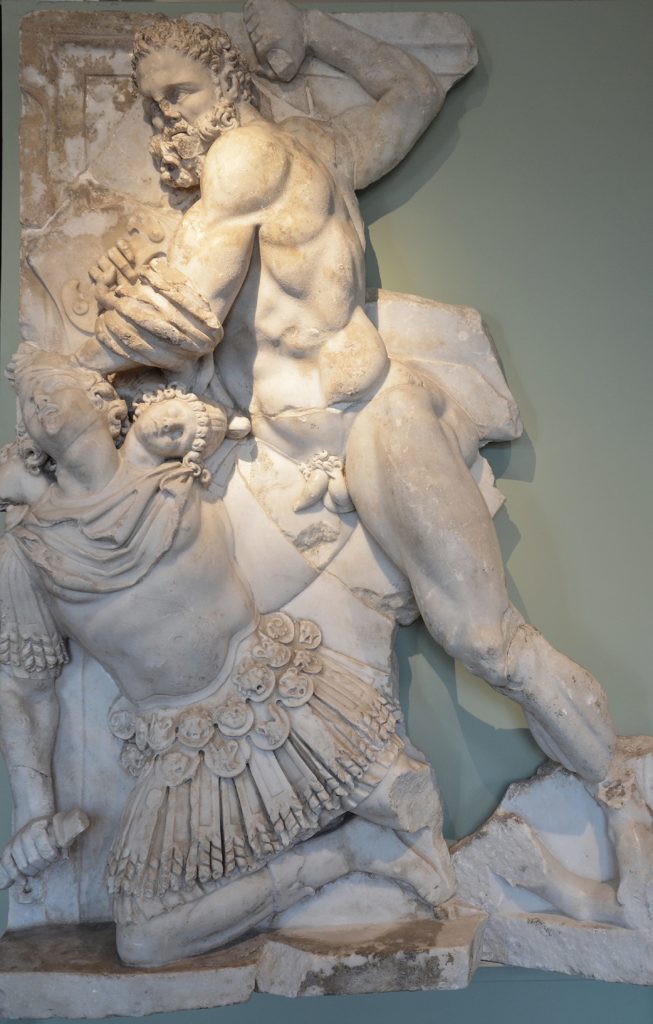 10. The Mares of King Diomedes Statue
Diomedes was a cruel Giant, Diomedes attacked Hercules, This made Hercules even more powerful. He seized the Diomedes by the waist and turned him upside down. Hercules was seated under a lion, and the frightened expression on the Diomedes ‘s face was well depicted. 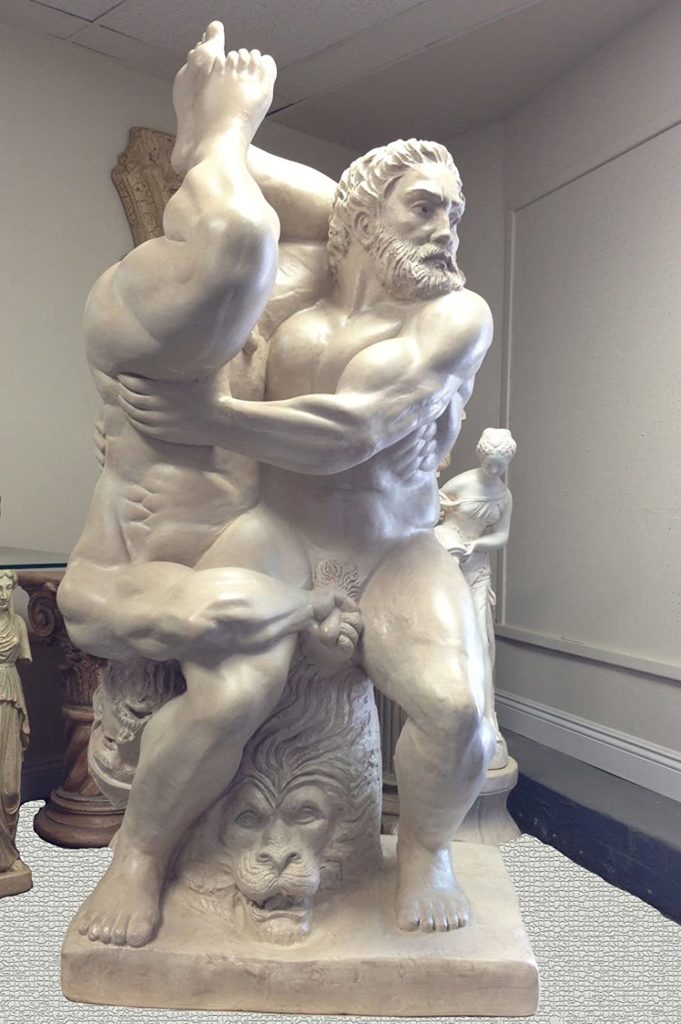 12. Hot Sale Statue Of The Capture of Cerberus
Hercules with his bare hands. He took all three heads of Cerberus in his arms at once, and pulled Cerberus till he lost consciousness. The Cerberus in the sculpture is extremely fierce, with its mouth wide open, and the expression of each head is different, while Hercules’ eyes are also full of determination.

Hercules corrects evil, promotes good, and dares to fight. He was so strong and courageous, whose deeds were so mighty, and who so endured all the hardships that were given to him, Hercules was both the most famous hero of ancient times and the most beloved. Hercules was worshipped in many temples all over Greece and Rome.

Whether you want to customize the sculpture of any story, we will use the most professional carving techniques, show the best design. Our designs are also diverse and innovative. If you have your own design we could do it to your specifications.