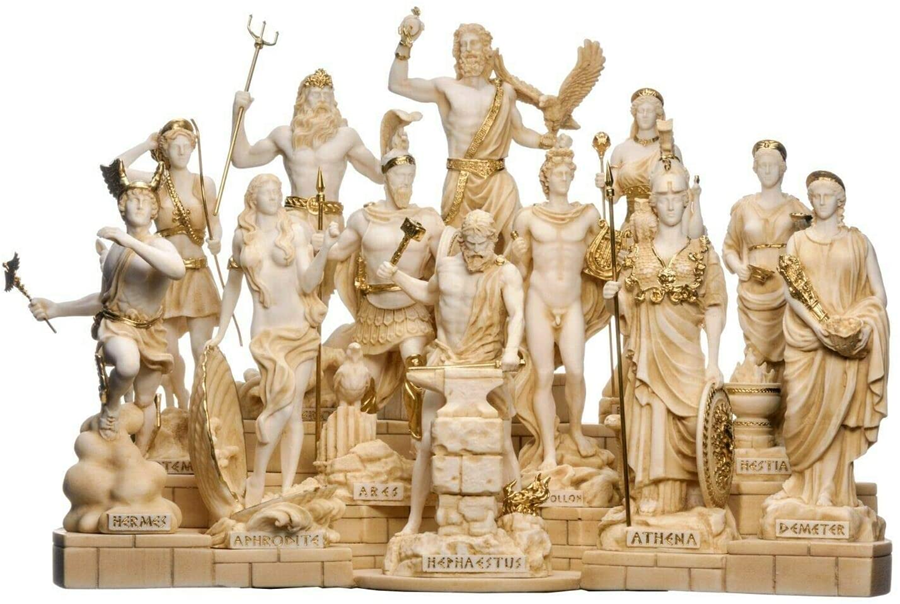 1. Zeus / Jupiter
Zeus is the first god in the heavens, the king of the gods, and the ruler of Olympus. He is the god of the sky, in charge of the universe, weather, order and destiny.
This statue portrays Zeus as a middle-aged man with lion’s mane hair and beard. He is tall and sturdy. He is dressed in layers of robes on his lower body, holding a thunderbolt in his left hand, and looks majestic and imposing. Located on the left side of the statue is the eagle, the holy object of Zeus. 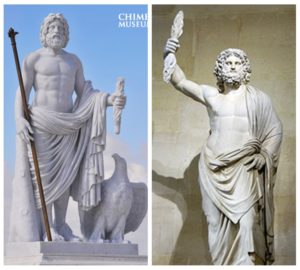 2. Hera / Juno
Hera is the queen of Olympus gods. She is the wife of Zeus, in charge of marriage, fertility and inheritance.
To
Hera and Zeus are the children of the Titan gods Cronus and Rhea, and she is the sister of Zeus. The statue of Hera wears a crown of flowers and leaves that symbolize power, holding a scepter in his right hand, and a wine container in his left hand, showing the authority of the queen in her body movements. In the traditional image, Hera is accompanied by peacocks and cuckoos. 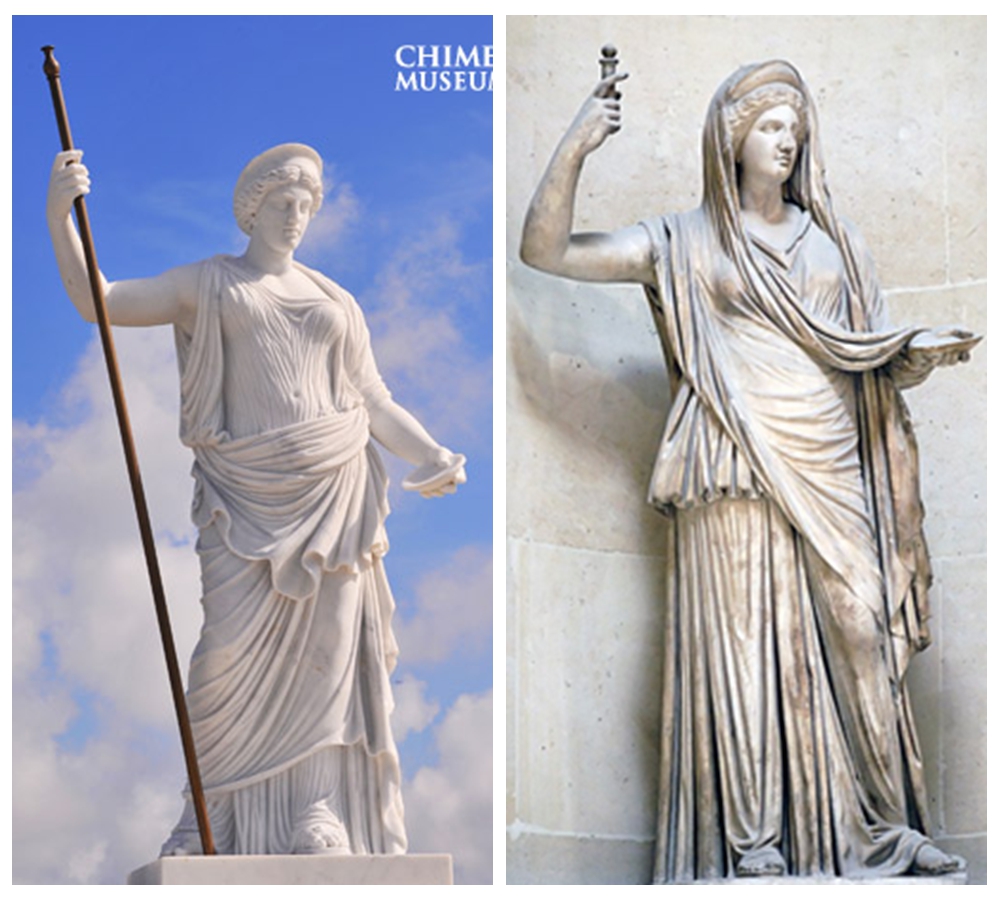 3. Demeter / Ceres
Demeter is the goddess of five grains in the myth, is the sister of Zeus, in charge of the growth of all things, the harvest of grains, agriculture and fertility.
The traditional image of the goddess of five grains is a middle-aged woman wearing a laurel wreath made of grain on her head and holding wheat ears. This statue has a dull expression and seems to be sad. , A balanced posture. 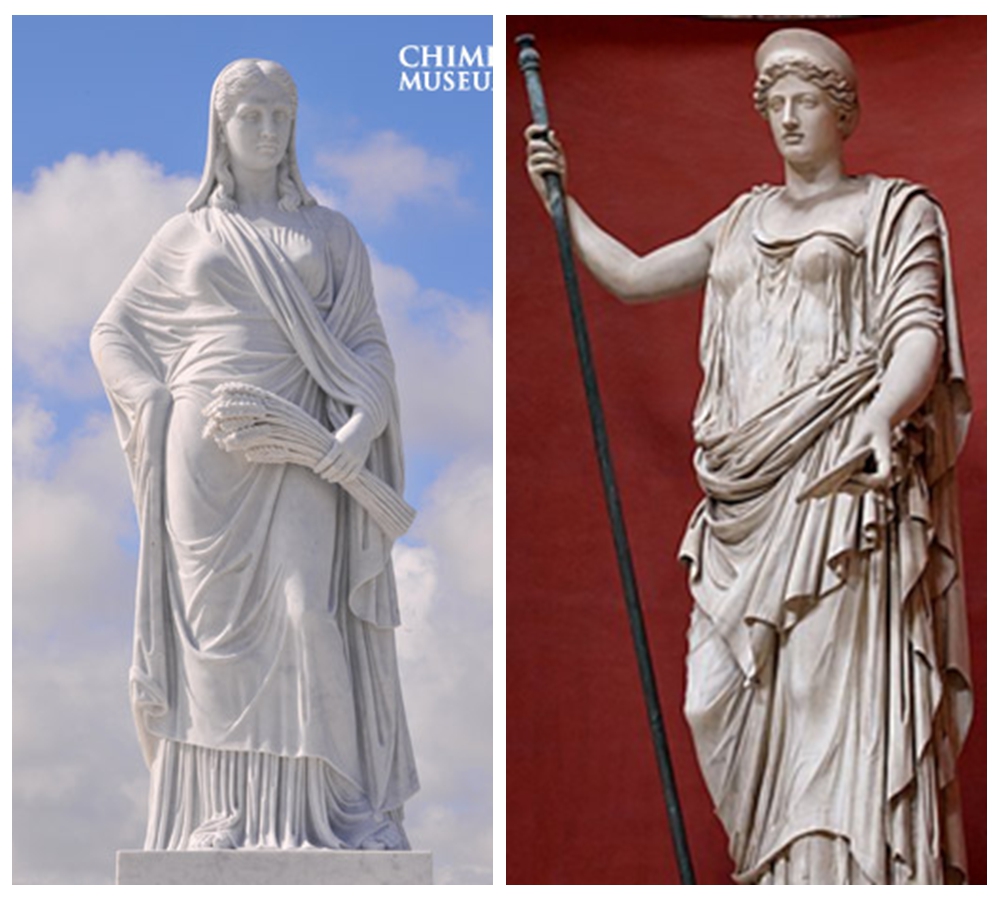 4. Hermes / Mercury
Hermes is a messenger between the gods and the human world, as well as a messenger who brings the dead into the underworld. He is also the god of travel, trade, and theft.
Hermes, the son of Zeus and Maia, was born smart and intelligent. This statue presents the young Hermes, who was ordered by Zeus to give the young Dionysus to the fairy of Mount Nissa. Hermes held up a bunch of grapes in his right hand, teasing Dionysus, and the grapes were the symbol of the god of wine. The interesting interaction between the gods can be seen through this work. 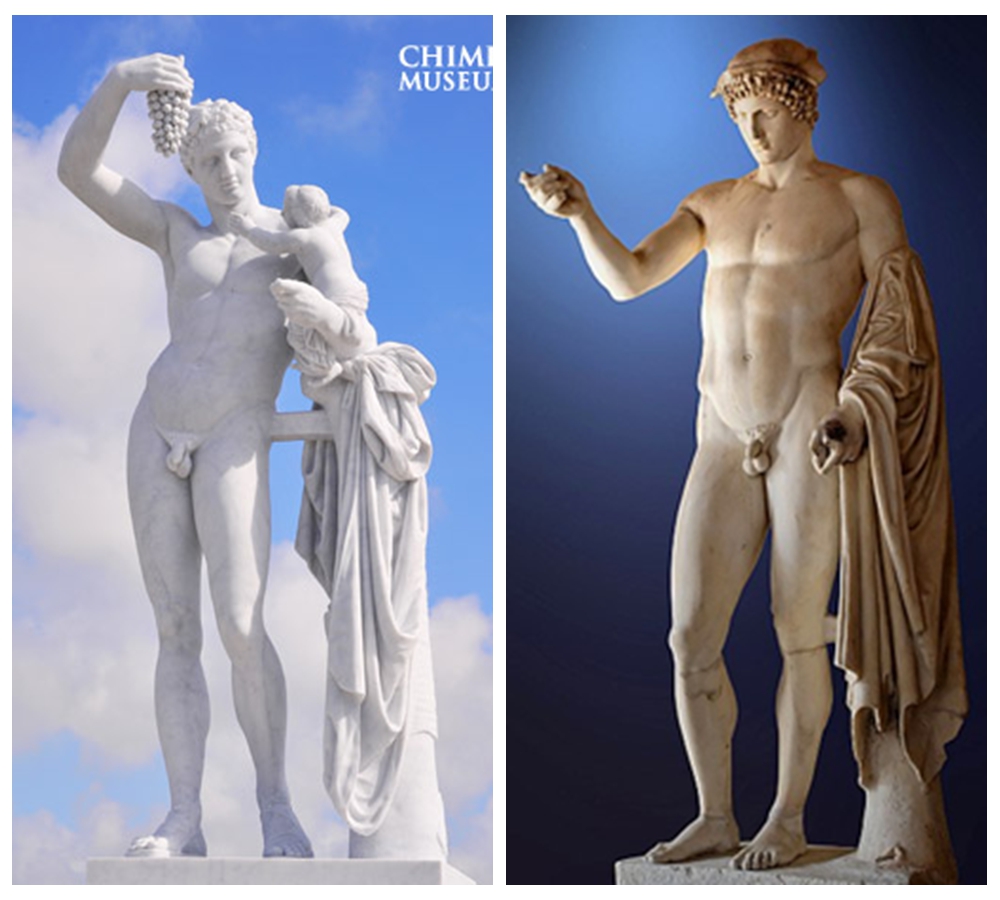 5. Ares / Mars
Ares is the god of war of Olympus, in charge of military and war.
To
Ares is the son of Zeus and Sheila. He represents bloodthirsty, violence and order. He has a rude temperament, martial arts and combativeness. He is a warrior who longs for war. This statue of Ares wears a helmet, has a strong body and perfect proportions. The center of gravity is on the left foot, leaning against the palm tree trunk behind, with a relaxed posture but full of tension. 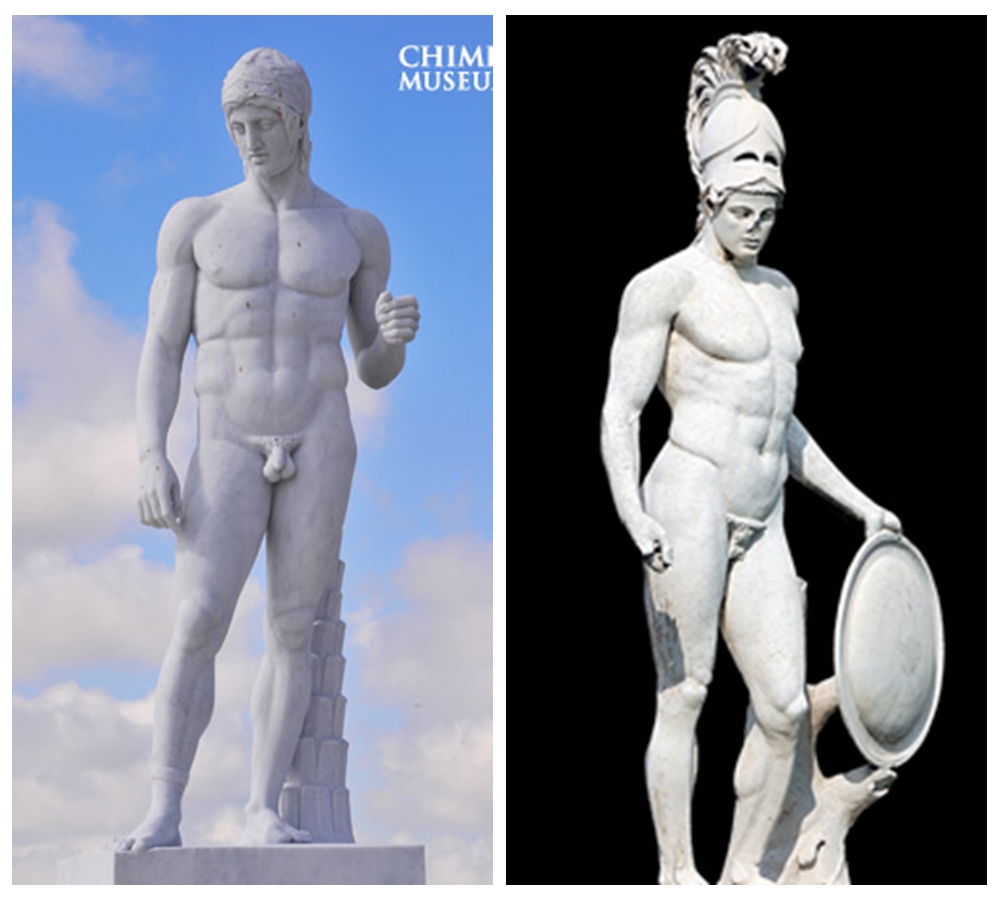 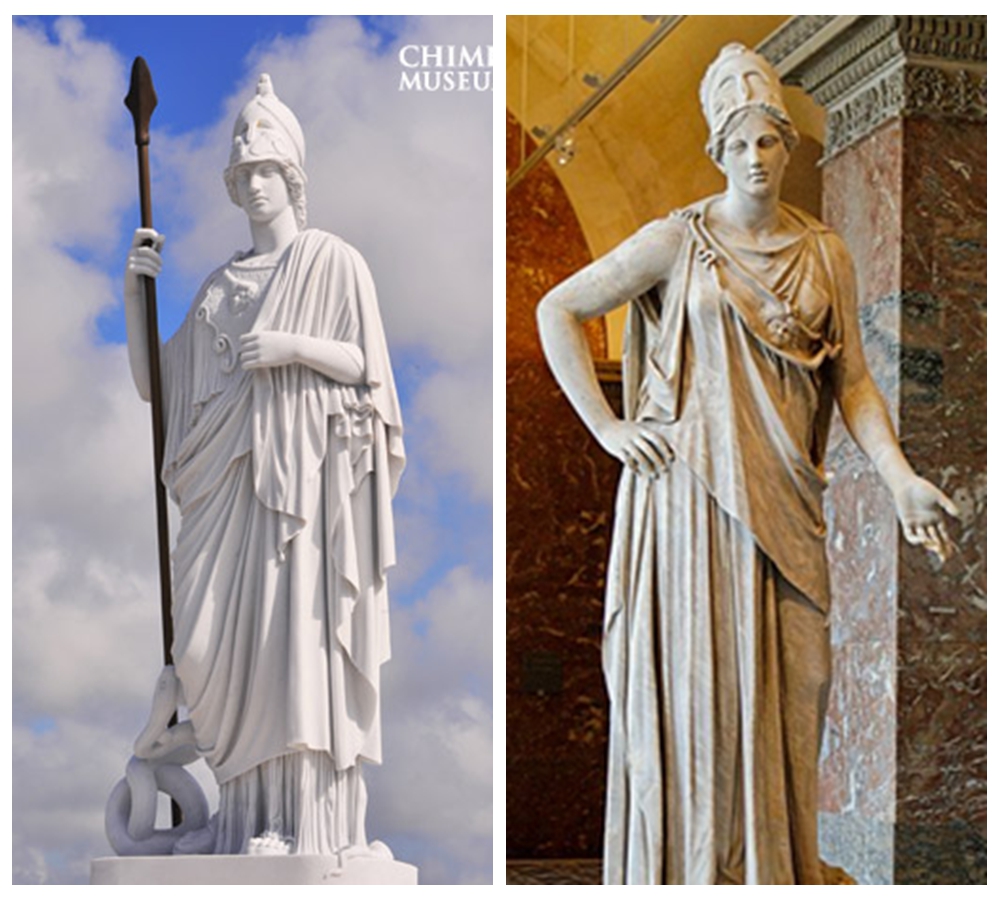 7. Artemis / Diana
rtemis is the goddess of the moon, but also the goddess of hunting, purity, childbirth, archery, and all animals.
Artemis is the daughter of Zeus and the goddess Lito, and the twin sister of the sun god Apollo. This statue presents Artemis unbuttoning her robe. She pinches the button to fix the robe with her right hand, showing an instant movement. The expression of the goddess is smiling, and the action of removing the robe is light and delicate, showing the gentle and graceful characteristics of the moon god. 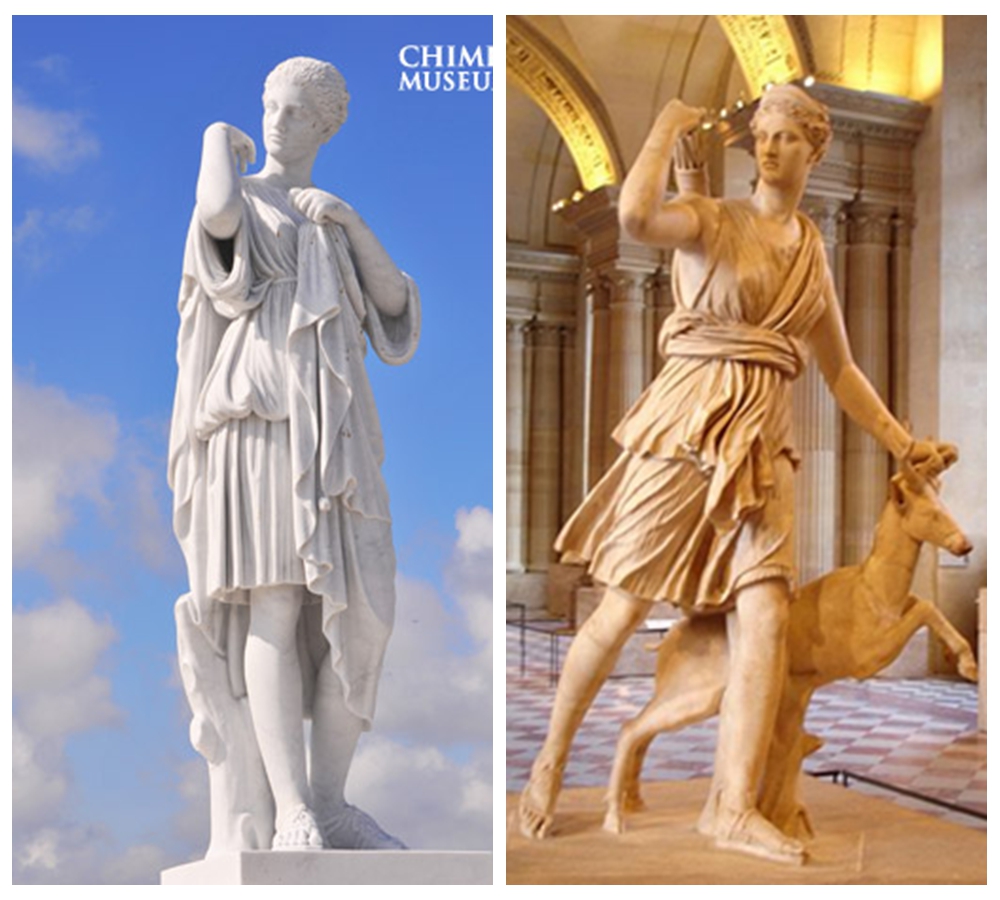 8. Apollo / Phoebus
Apollo is the sun god who controls the light, and he is also the master of knowledge, music, poetry, oracles and archery.
Apollo is the son of Zeus and the goddess Lito, and is twin brother and sister with the moon god Atimis. This statue presents the vivid posture of the sun god shooting arrows at the giant python: a handsome and needless young man wearing a crown of laurels and the arrow in his hand is off the string. Turning his head to the left, he looked directly at the arm holding the bow in front of him, the right hand of the bow was lowered, and his face showed a triumphant and confident expression. 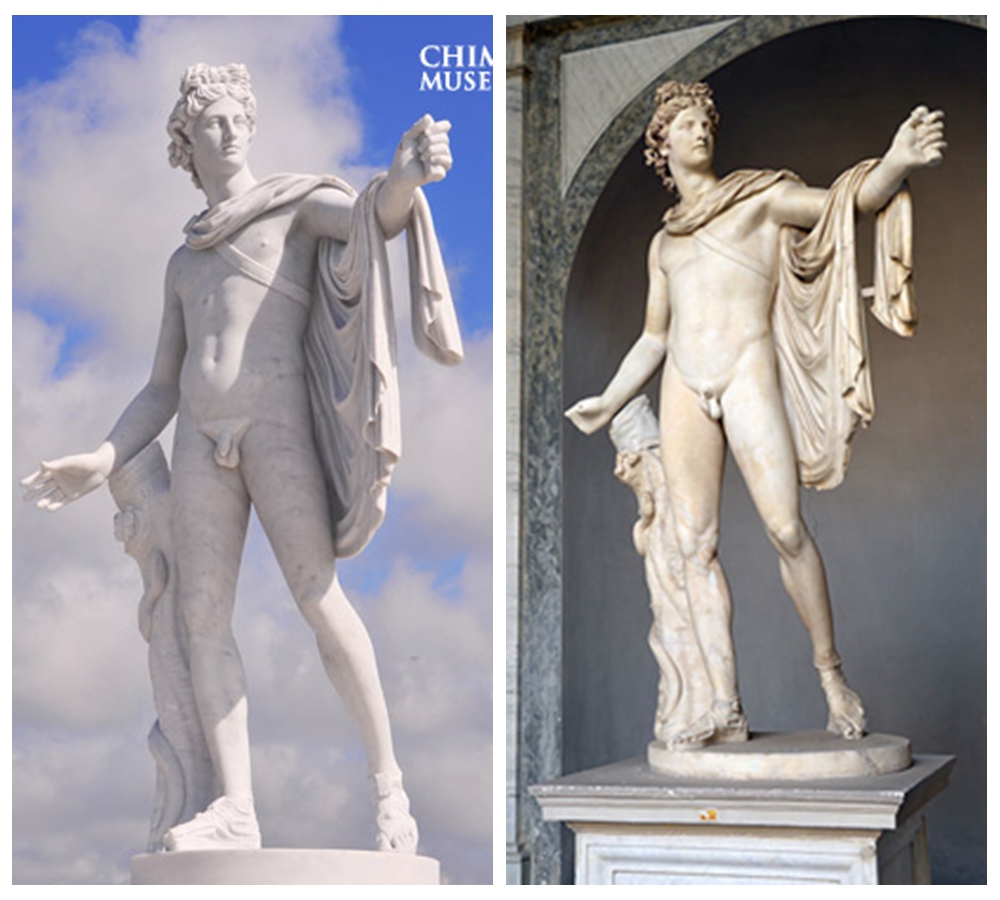 9. Hephaestus / Vulcanus
Hephaestus is the god of fire and iron smelting, specializing in crafting artifacts for the gods.
Hephaestus is the son of Zeus and Sheila. He was abandoned by his mother Sheila when he was born because of his ugly appearance, and then became lame by accident. This statue shows a middle-aged Hephaestus with a beard. He holds the iron tongs in his left hand and the hammer in his right hand, showing the scene of Vulcan smelting metal. 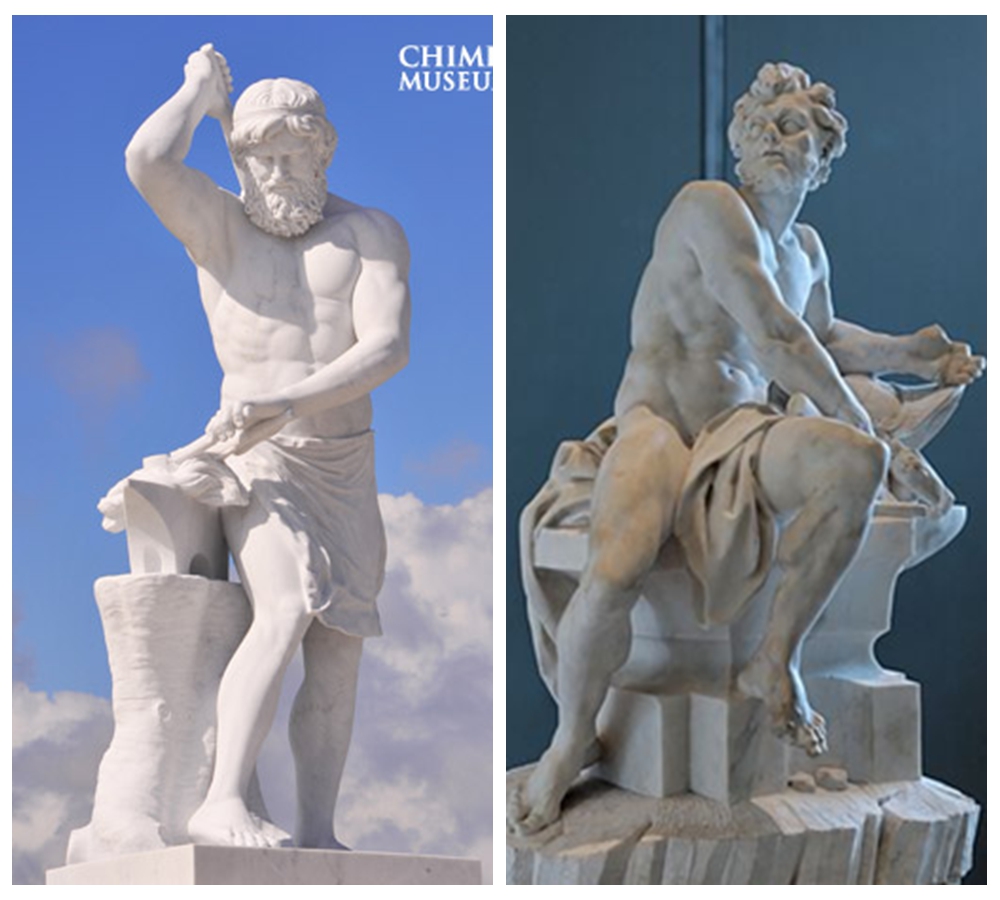 10. Aphrodite / Venus
Aphrodite is the most beautiful goddess in Greek mythology, representing love, beauty and temptation.
To
According to Greek mythology, Aphrodite was born in the foam of the ocean and emerged from a large shell. Because of her moving beauty, the gods were sought after, but in the end the god of beauty married the god of fire Hephaestus. The statue presents Aphrodite preparing to take a bath in the sea. The body of the goddess leans forward and her calves are slightly bent, forming a graceful S curve. The goddess gazes at the nearby water surface, her expression is shy, and she expresses the feminine beauty to the fullest. The original of this work is also the earliest surviving statue of a naked woman. 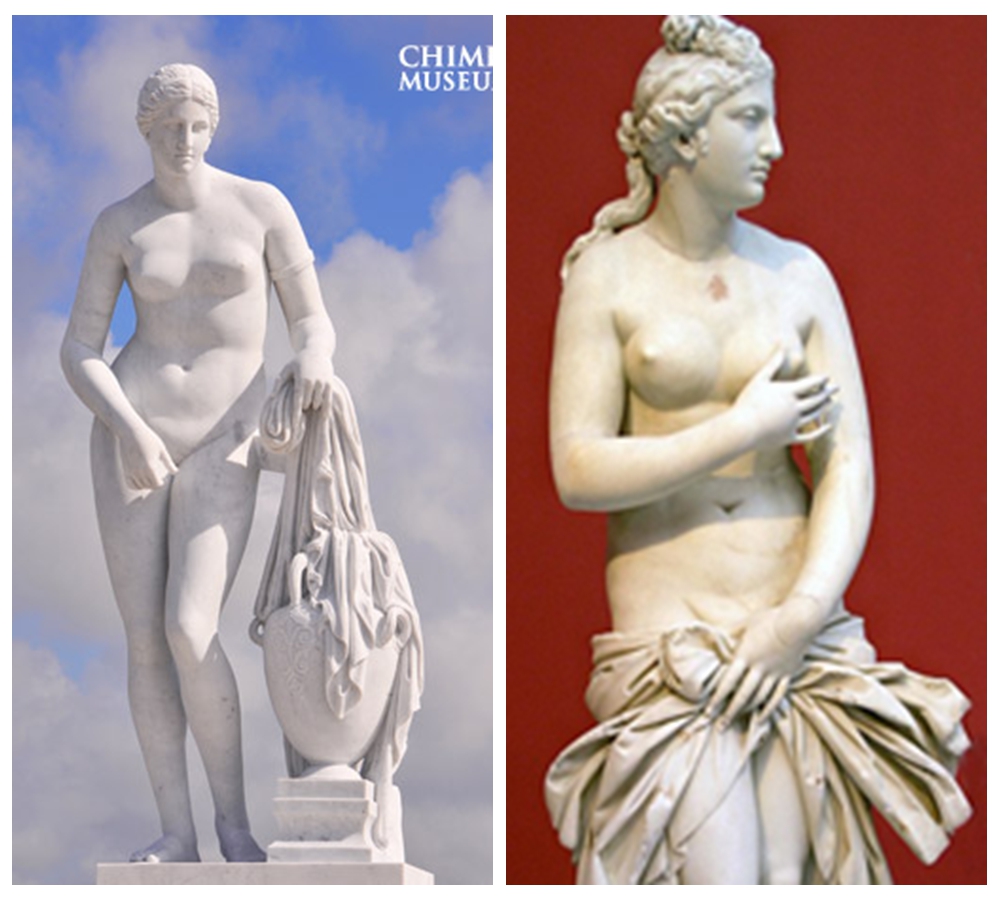 11. Hestia / Vesta
Hestia is the oldest child born to Cronus and Rhea. This statue presents Hestia holding a vessel. Because of the identity of the goddess, she does not show off a beautiful body like Aphrodite, but wears a robe. The lines of the folds on the top are treated in layers, highlighting the elegance and dignity of the stove goddess.

12. Poseidon / Neptune
Poseidon is the ruler of the ocean, in charge of oceans, rivers, floods, earthquakes and horses.
Poseidon is the brother of the god Zeus and Hades. This statue highlights the traditional image of Poseidon, a middle-aged man with a dark beard. The statue is tall, sturdy and well-proportioned, showing the strength and beauty of a man. The strange creature on the right foot is a dolphin that often follows the sea god.

The carvings of the marble are so delicate and the details are so well processed, which portrays the characteristics of each god. Every artist has his own ideas, and the same god’s different postures and demeanors will give people different feelings.
Of course, the artists in our factory can certainly sculpt the feeling you want. Please trust our professional services and ingenuity.