10 of the Most Famous Sculptures You Need to Know 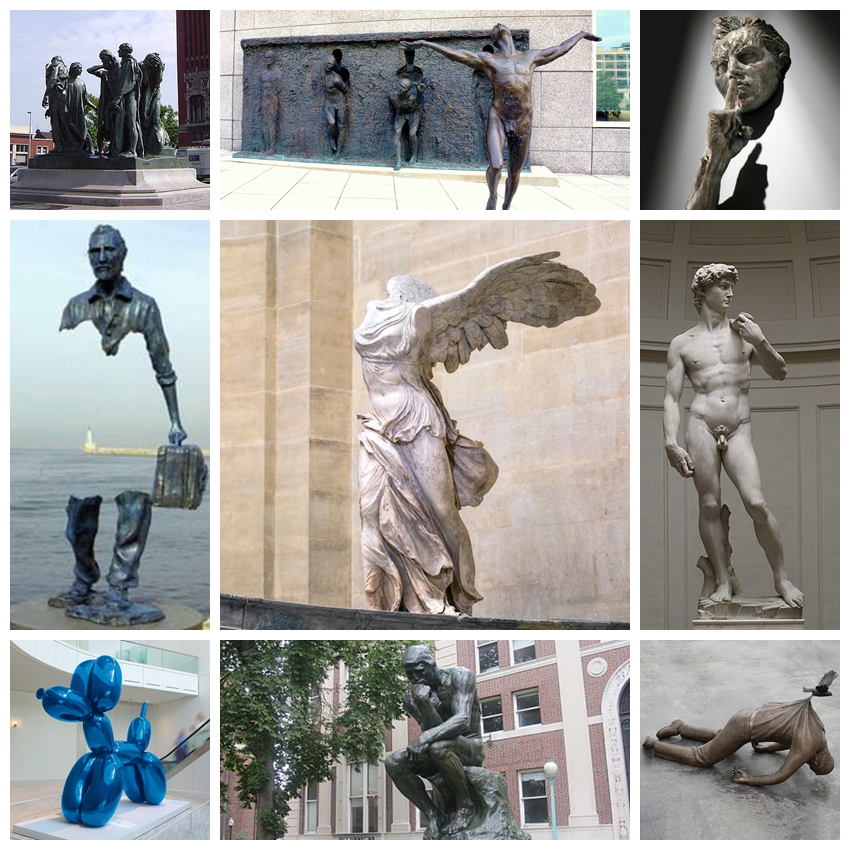 “I wanted to create a sculpture almost anyone, regardless of their background, could look at and instantly recognize that it is about the idea of struggling to break free. This sculpture is about the struggle for achievement of freedom through the creative process.”
– Zenos Frudakis 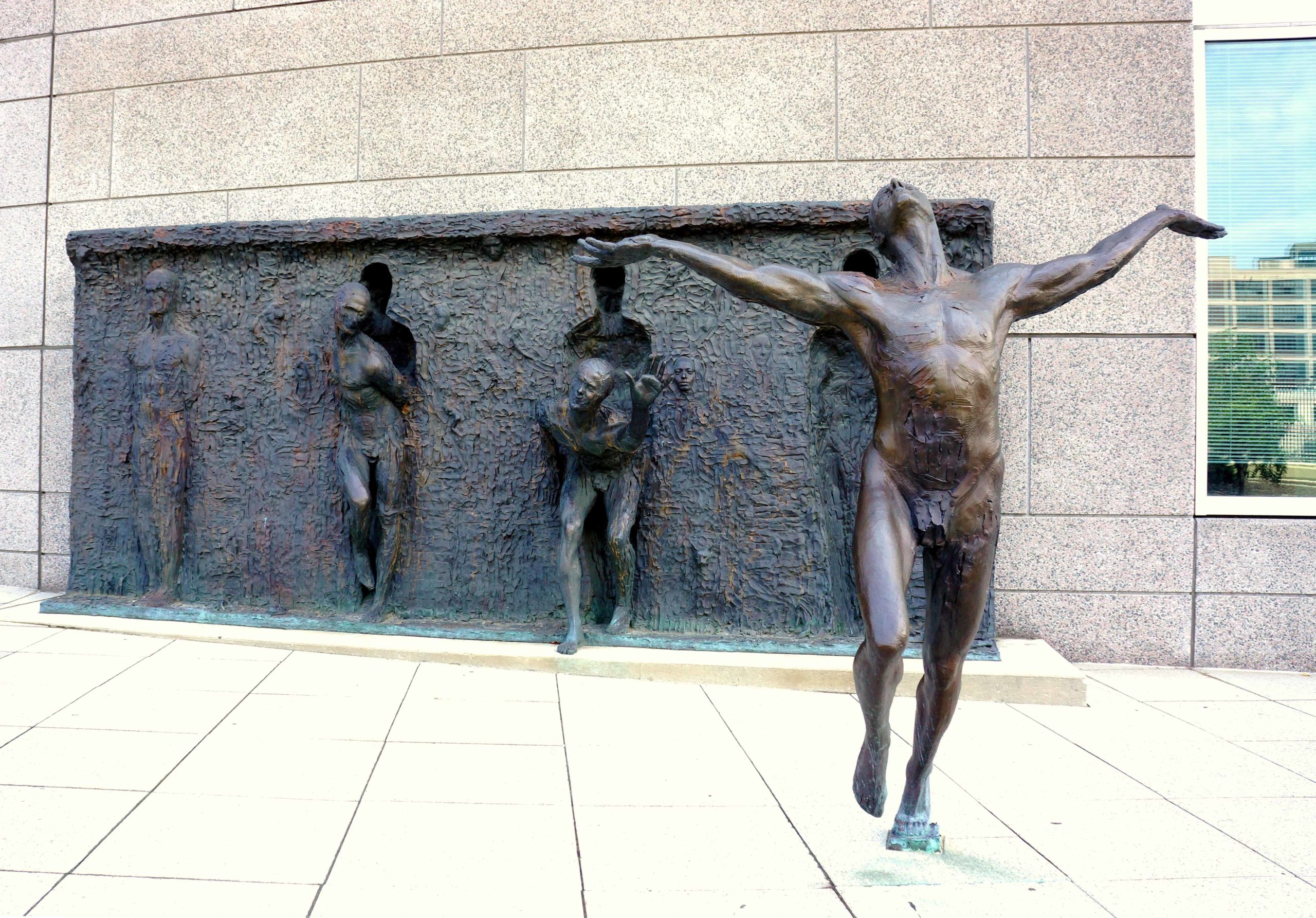 Freedom sculpture is a monument,Although there are four figures represented, the work is really one figure moving from left to right. In the first image, the man is tightly bound in chains, he couldn’t move. So he pulled away slowly, he put his head out, yearning to be freedom. When at last he came out, he opened his arms for the freedom he had longed for so long, and his heart must have been very relax!
Apart from the fact that the main body of the monument is the man who broke away, there are many small details on it. It’s one little shackle after another in our lives. But you have to believe that we will break bound and get the feedom of heart!

2.Les Voyageurs
French artist Bruno Catalano has created an extraordinary series of eye-catching bronze sculptures called “Les Voyageurs” in Marseilles that depict realistic human workers with large parts of their bodies missing.
This sculpture gives us the most intuitive feeling that travelers have lost their hearts. Modern Workers of different professions all live in busy cities and have to carry travel bags to go on business every day.
But they never stop to take a good look at their own heart, Do you still remember their original heart?
The sculpture also uses a new anti-gravity design, with the handbag supporting the upper body. So creative sculpture idea! 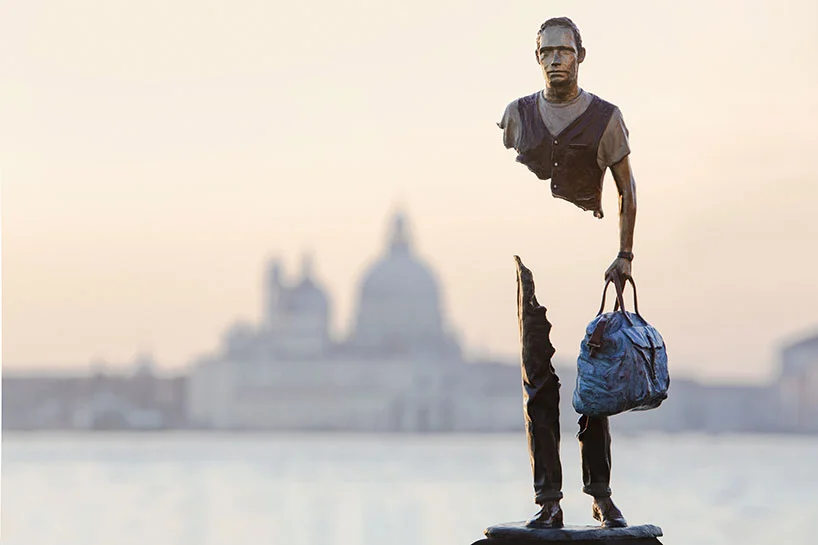 3.The Thinker
The Thinker is a bronze sculpture by Auguste Rodin, usually placed on a stone pedestal. The work shows a nude male figure of heroic size sitting on a rock resting on his chin on one hand as though deep in thought. This sculpture is so famous that it is placed in philosophy museums, universities, and public squares…Whenever people see this sculpture, do they have a moment of reflection?
This thinker sculpture is best suitable made of the bronze material , the texture of his skin, mottled and rough but don’t lose real. It shows the bodybuilding that a man should have to the fullest. 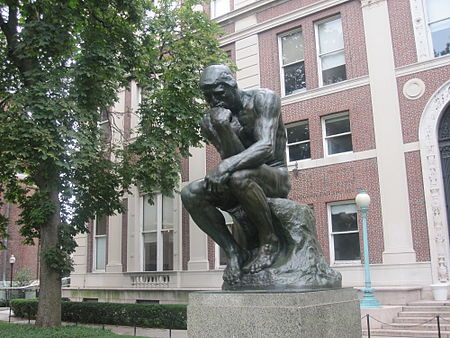 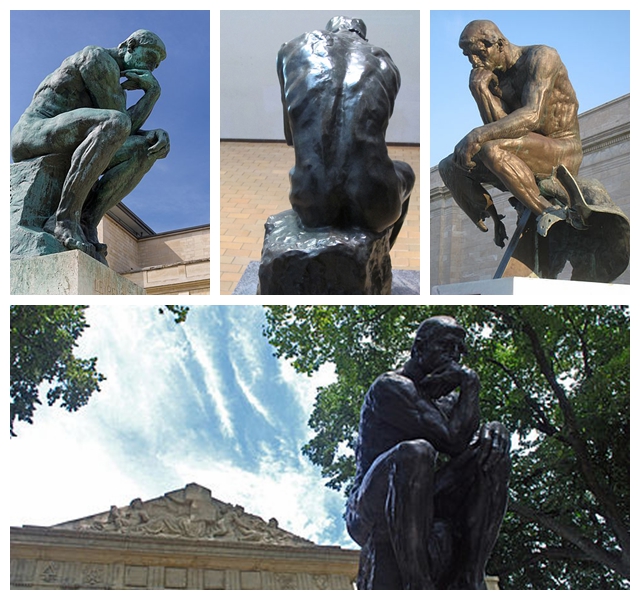 4.Nike of Samothrace
The Winged Victory of Samothrace is an iconic example of Hellenistic Greek sculpture. The Greek goddess of victory pressed her clothes to her body and walked forward with her head held high, as if leading an army to victory at the bow. The most victorious gesture is the backward stretching of the wings. This sculpture is perfect for marble carving, carving every little detail on the wings like real feathers.
The nature of the marble is more expressive of the goddess’s purity and holiness. The thin clothes like cicadas reveal the beautiful skin. This goddess sculpture is a victorious gesture from every point of view. It will give people beauty and courage no matter where it is placed 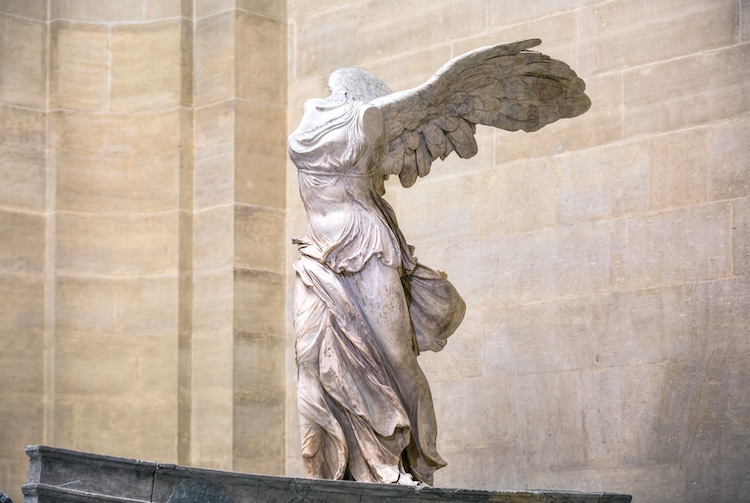 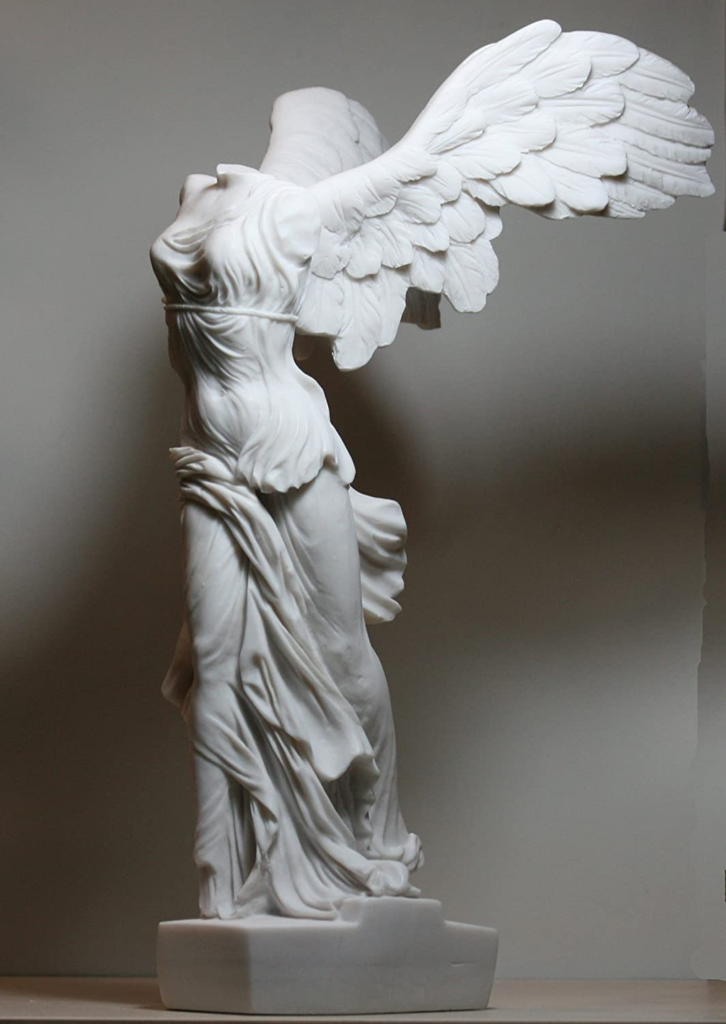 5.David by Michelangelo
Michelangelo was a well-known artist, and his work David became a masterpiece of the Renaissance. David’s overall posture is confident and calm with a little tension, his eyes sharp look to the left, showing the determination to win, his right hand veins bulge to see that he is so nervous, his muscles are so strong, the lines and shadows are drawn carefully. Let us have to admire Michelangelo’s artistic attainments again.

6.The Burghers of Calais
The Burghers of Calais is a sculpture by Auguste Rodin, It tells the story of the siege of Calais in 1347, during the Hundred Years War. Calais was besieged by the British for nearly a year. The six were divided into two groups, one before the other and one after the other, arranged together in a dramatic way that seemed to be separate but yet tightly connected.
These six citizens face death in a variety of ways, some confused, some fearless, some extremely painful, and their eyes and actions are portrayed with empathy.You almost forget that it’s just sculpture. This combined sculpture, also be called a monument, its core is amazing spirit of the willingness to die for the sake of truth, justice, and love.

In addition to these six famous sculptures, there are many new age artists who are loved by people. Such as Wall man by Matteo Pugliese, Balloon dogs by Jeff Koons…
7.Wall Man
Matteo Pugliese created many different forms of people on the wall. At a glance, they are full of muscle lines and full of strength. Seeing them want to climb out of the wall, want to break free, we even have their feeling of being unable to escape as audiences.
So creative sculptures of wall man are suitable for hanging on the wall of the living room. It is an advanced form of advanced power.

8.Balloon dogs
The balloon dog is a stunning novelty sculpture, and it’s often said that every artist is a strange genius. American pop artist Jeff Koons has made a name for himself by renovating old objects, in particular by making mirror-like sculptures of balloon animals made of stainless steel.
“I’ve always loved inflatable products because they remind me that we’re surrounded by air and that we’re breathing.”Jeff said.
The novelty of the balloon dog is sure to be a hit with children, as it is painted in translucent paint in different colours. The magic of balloon dog is that it reflects the cute but not lose strength, is the perfect combination of color and material.

Of course, there are some interesting and thought-provoking creative sculptures that are niche.
9.Don’t lose your heart
This sculpture is also an example of anti-gravity design. A man is almost lying on the ground because of his life, and a bird grabs his back clothes and wants to lift him up. Even the birds fly so hard, how can those who are discouraged give up?
This sculpture was placed on the streets of the crowded square, reminding people passing by, when you feel tired due to the pressure of life and want to give up, don’t be discouraged. Look at the birds who work so hard,you also can do it too.

10.The man at work
The man work statue is a representative of the city of Bratislava, the most symbolic statue.
It is a person who leans on the calabash and shows his head. He looks at the city with a smile on his face. Even if he is doing an insignificant little job in the city, he has his own little fun, which can make life and work not so boring.
This bronze sculpture has retained for a long time, staying at its most vivid even in the snow and ice.

Some of these famous sculptures have become a symbol of an era, some have become a memorial of a story, and some have brought power to people. As a sculpture company, our original intention is to find people who also love sculpture and make one story for them , perhaps the person who is no longer there, or the warm power, every sculpture will be full of life under our hands.